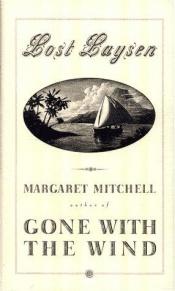 Lost Laysen is a novella written by Margaret Mitchell in 1916, although it was not published until 1996.
Mitchell, who is best known as the author of Gone with the Wind, was believed to have only written one full book during her lifetime. However, when she was 15, she had written the manuscript to Lost Laysen—a romance set in the South Pacific. She gave the two notebooks containing the handwritten work to a suitor named Henry Love Angel, who kept the manuscript along with a number of letters Mitchell had sent him. Angel died in 1945, but Lost Laysen remained undiscovered until his son found the manuscript while preparing to donate the letters to the Road to Tara Museum.
Lost Laysen was first published in 1996 by the Scribner imprint of Simon & Schuster. Edited by Debra Freer, the book includes an extensive introduction telling the story of Mitchell and Angel's relationship, complete with photographs and reproductions of some of her letters.
The protagonists of the novella are presumably based on real people – heroine Courtenay Ross, although named after Mitchell's friend, has Mitchell's personality, and Billy Duncan is probably based on Henry Angel.