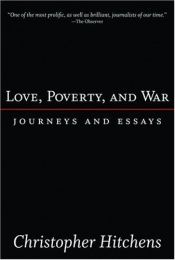 Love, Poverty, and War: Journeys and Essays is a collection of essays and reportage by author, journalist and literary critic Christopher Hitchens. The title of the book is explained in the introduction, which informs the reader that "an antique saying has it that a man's life is incomplete unless or until he has tasted love, poverty, and war."
The "Love" section includes essays on some of Hitchens's favourite literary figures: Evelyn Waugh, James Joyce, Leon Trotsky and Rudyard Kipling; "Poverty" includes critiques of the likes of Mother Teresa, Michael Moore, Mel Gibson and David Irving; while "War" is divided into writings "Before September" and "After September." showing Hitchens' reaction to the Terrorist attacks of September 11, 2001. As Colm Tóibín observes in his review, "the book is overshadowed by that day and by Hitchens's response to it." It was, in Hitchens's words, "a condensed day of love, poverty, and war, all right."