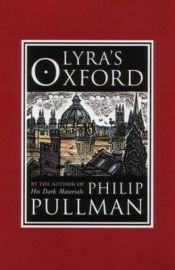 Lyra's Oxford is a short book by Philip Pullman depicting an episode involving the heroine of His Dark Materials, Pullman's best-selling trilogy. Lyra's Oxford is set when Lyra Silvertongue is 15, two years after the end of the trilogy. It was released to quench the thirst of fans of the trilogy while they wait for the unspecified release of The Book of Dust, and also to expand upon Pullman's themes from the trilogy.
The book consists mainly of an illustrated short story, "Lyra and the Birds". A fold-out map of "Oxford by Train, River and Zeppelin" is bound in the book, a fictional map of the Oxford that exists in Lyra's world. It also includes some advertisements for books and travellers' catalogues. Two pages from a Baedeker published in Lyra's world, a postcard from the character Mary Malone, and a brochure for the cruise ship Zenobia are also included. Pullman compares the movement of these objects to particles in a cloud chamber. The idea is that they have floated accidentally through an inter-world window.

Once Upon a Time in the North

Tales from the White Hart

The Unpleasant Profession of Jonathan Hoag