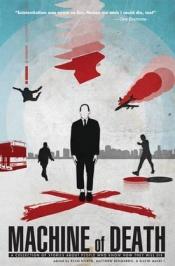 Machine of Death is a 2010 collection of science fiction short stories edited by Ryan North, Matthew Bennardo, and David Malki.
All of the stories center around a device which, when provided with a blood sample, can identify the way a person will die. The machine relays this information by printing a short word or phrase, which serves as the title of each story, on a small card. The machine is never wrong, but often vague or cryptic.
The premise was inspired by an episode of Ryan North's Dinosaur Comics. The three editors solicited submissions, many of them from novice and unpublished or unknown writers, in early 2007. After failing to find a publisher willing to accept an anthology containing material by so many unknown authors, the editors self-published the book in late 2010.
Shortly after the book's publication, the editors announced "MOD-Day", encouraging buyers to purchase the book en masse on October 26 in an effort to reach #1 on the bestseller list on Amazon.com. The effort was successful. Malki described the feat as the literary equivalent of winning the Super Bowl.

The Road to Mars