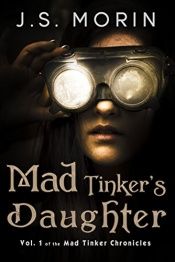 All 4 books are now available in this followup series to the best-selling Twinborn Trilogy. If you're looking for all the complexity of your favorite epic fantasy with all the fun of your favorite steampunk, the Mad Tinker Chronicles is for you!

In a world where humans are a slave race, there are only two options: serve, or fight. Can a mad tinker add a third option: escape?

Cadmus Errol is the greatest inventor that Tellurak has ever known. His clockwork graces the spires of cities across the world. Yet in another, darker world, he lives the life of a slave. There, humanity is held underfoot, bound in service to the victors of a war fought untold generations ago. It will take all the wits and resources of the best that humanity can muster to break that hold. Can Cadmus Errol, the Mad Tinker, be the one to free them all?

Other books in the Mad Tinker Chronicles:

The world told her No. She didn’t listen.

Madlin Errol is heiress to the greatest fortune in Tellurak. Her father, the Mad Tinker, has built an empire by crafting devices that no one else in the world could match. Madlin grew up spoiled, given everything she could wish for: the finest tools, all the raw metals she could ask for, and a workshop of her very own. Yet in her sleep, she lives another life, in another world.

Korr...a world where humans are subjugated, working menial jobs or even enslaved. The ruling kuduks treat them like talking animals. In that world, Madlin is known as Rynn, a girl who grew up without her parents, mired in the depths of an underground city, sleeping in a boiler room. But unlike so many of her fellow humans, she has seen a world where there are no limits. She, and a growing number of human rebels, have begun to fight back.