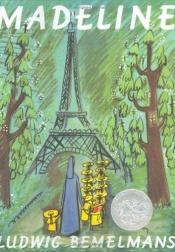 Madeline is a 1939 book written and illustrated by Ludwig Bemelmans, the first in the book series, which inspired the Madeline media franchise. It is considered one of the major classics of children's literature.
The story is set in Catholic boarding school in Paris, France. The opening rhyming sentences were repeated at the start of the subsequent books in the series:
In an old house in Paris
That was covered in vines
Lived twelve little girls in two straight lines.
Madeline is the smallest of the girls. She is seven years old, and the only redhead. She is the bravest and most daring of the girls.
The text of book is set in rhyme.
Madeline was named a Caldecott Honor Book for 1940.