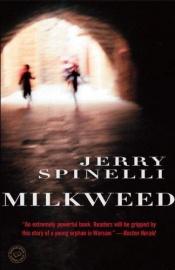 Milkweed is a 2003 young adult historical fiction novel by American author Jerry Spinelli. The book is about a boy in Warsaw, Poland in the years of World War II during the Holocaust. Over time he is taken in by a Jewish group of orphans and he must avoid the German troops while living on the streets with other orphans. The story narrator is the boy in the future living in America recalling his past experiences. Despite being a historical fiction novel, Doctor Korczak, a minor character in the story is based on a real person named Janusz Korczak.
Milkweed is the tale of a boy with no identity at a time when one's identity meant the difference between life and death. Published in 2003, the novel became a popular young adult work used by English teachers to facilitate a discussion of the Holocaust. Readers are immersed in the experiences of a child who does not fully comprehend what is happening around him in the Warsaw ghetto.

The True Confessions of Charlotte Doyle

My Brother Sam Is Dead