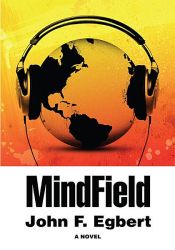 What would happen if most of the people in America became deaf almost overnight? Chaos? Financial collapse? Anarchy?

None of the above?

"MindField" is a thrill ride with a message; a premise torn right out of today's headlines. A terrorist cell ignites an aerosol dispersion of what is thought to be deadly bacteria-spinal meningitis. It quickly spreads from a small town in Montana to nearly 30 states, eventually affecting more than three million people-an epidemic of nation-threatening proportions.

However, the problem isn't death-it's deaf. The physical symptoms of the disease disappear after three weeks, the only remaining tragedy is all those who are stricken become permanently deaf-a common side effect of spinal meningitis.

The United States is turned inside out, now a country where millions of the inhabitants can't hear. An underground government is formed deep beneath the NORAD facilities in Colorado. A catastrophe of unimaginable proportions-or is it?

"MindField" is a fast paced, plot driven suspense novel with a pleasant surprising, and incredibly potent message about the way we might live our lives if we "all" had to listen with our eyes and hearts, and how the world might be a much better place for it.

A Gentleman in Moscow: A Novel

The Redemption of Callie and Kayden