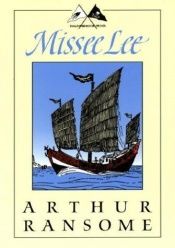 Missee Lee is the tenth book of Arthur Ransome's Swallows and Amazons series of children's books, set in 1930s China. The Swallows and Amazons are on a round-the-world trip with Captain Flint aboard the schooner Wild Cat. After the Wild Cat sinks, they escape in the Swallow and Amazon, but are separated in a storm. Both dinghies eventually end up in the lair of the Three Island pirates, where they are held prisoner by the unusual Missee Lee, the leader of the Three Island pirates.
The book, published in 1941, is considered one of the metafictional books in the series, along with Peter Duck and perhaps Great Northern?. One aspect of this book that modern readers may find objectionable is that all the Chinese characters are depicted as speaking English with a very stereotypical accent and grammar.