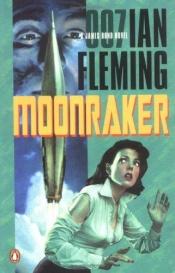 Moonraker is the third novel by the British author Ian Fleming to feature his fictional British Secret Service agent Commander James Bond. The book was first published by Jonathan Cape on 5 April 1955, and featured a cover design conceived by Fleming; a paperback version was published the following year. The plot came about from a screenplay Fleming had written that was too short for a full novel so, for the first half of the book, he added a game of bridge between Bond and the industrialist Sir Hugo Drax, in which the latter is caught cheating. The second half follows Bond's efforts to thwart Drax's ambition to fire a nuclear missile at London. Uniquely for a Bond novel, the story is set entirely in Britain.
The book plays on a number of 1950s fears, including attack by rockets, the re-emergence of Nazism, Soviet communism and the "threat from within". Fleming examines Englishness, and the novel shows the virtues and strength of England. Adaptations include a broadcast on South African radio in 1956 starring Bob Holness and a 1958 Daily Express comic strip.

The Riddle of the Sands