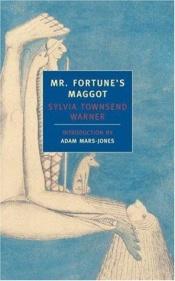 Mr. Fortune's Maggot; and, The Salutation

After a decade in one South Seas mission, a London bank-clerk-turned-minister sets his heart on serving a remote volcanic island. Fanua contains neither cannibals nor Christians, but its citizens, his superior warns, are like children—immoral children. Still, Mr. Timothy Fortune lights out for Fanua. Yet after three years, he has made only one convert, and his devotion to the boy may prove more sensual than sacred. Mr. Fortune’s Maggot, Sylvia Townsend Warner’s second novel, is lyrical, droll, and deeply affecting, and her missionary captivated his creator as much as he did her readers.

Long after the book's publication, Warner began the novella The Salutation. Now adrift and starving on the Brazilian pampas, Mr. Fortune is rescued by an elderly widow, who delights in having an Englishman about the house. Her heir, however, may beg to differ.

Brilliant and subversive, Mr. Fortune's Maggot and its sequel are now available for the first time ever in one volume. They show Sylvia Townsend Warner at the height of her powers.

History of the Thirteen

The Fruits of the Earth

The Heir of Redclyffe

Wigs on the green