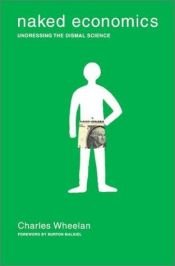 Naked Economics: Undressing the Dismal Science is a book by Charles Wheelan that seeks to translate basic economic issues into a format that can be easily read by people with little or no previous knowledge of economics. The Chicago Tribune described the book as "Translat[ing] the arcane and often inscrutable jargon of the professional economist into language accessible to the inquiring but frustrated layman." A fully revised and updated version of the book with a foreword by Burton Malkiel was published in 2010.
It has been translated into eleven languages.
In January 2013, Charles Wheelan published a follow-up to Naked Economics called Naked Statistics: Stripping the Dread from the Data

The Truth About Markets

The Vision of the Anointed Self - Congratulation as …

The Condition of the Working Class in England

What Has Government Done to Our Money?

The Age of Consent