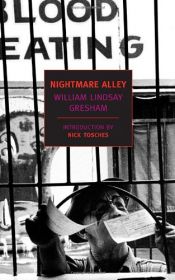 Nightmare Alley is a novel by William Lindsay Gresham published in 1946. It is a study of the lowest depths of showbiz and its sleazy inhabitants – the dark, shadowy world of a second rate carnival filled with hustlers, scheming grifters, and Machiavellian femmes fatales.
Gresham attributed the origin of Nightmare Alley to conversations he had with a former carnival worker while they were both serving as volunteers with the Loyalist forces in the Spanish Civil War. Gresham wrote the novel, his first, while working as an editor for a "true crime" pulp magazine in New York City during the 1940s. He outlined the plot and wrote the first six chapters over a period of two years, then finished the book in four months. Each chapter is represented by a different Tarot card.

The Two Faces of January