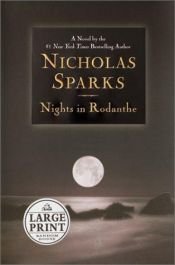 Nights in Rodanthe is a romantic love novel by American writer Nicholas Sparks in September 2002.
Set in Rodanthe, North Carolina, the story follows the purely intense and close romance of a divorced mother, Adrienne Willis, and a divorced father and surgeon, Paul Flanner. The novel's two main protagonists meet in an inn in Rodanthe and fall strongly in love. However, fate and destiny falls upon them when they realize that leaving Rodanthe would mean going back to their separate lives.
Sparks based parts of his story on his own life's events, particularly his courting of the woman he married, Cathy Cote. Themes of genuine romantic love, and sacrifice are incorporated in the novel. Nights in Rodanthe was adapted into a 2008 film of the same name.

Charms for the Easy Life