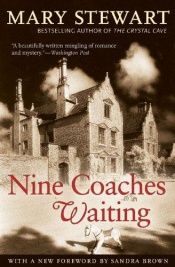 Nine Coaches Waiting is a then-contemporary suspense, Gothic Romance novel by Mary Stewart published originally in 1958. The setting is the late 1950s — contemporary to the time of its first publication.
The novel tells the haunting tale of a young English governess, Linda Martin, who travels to the Château Valmy, near Thonon-les-Bains, France, to take care of nine-year-old Philippe de Valmy. There she finds herself tangled in a plot to murder her charge and tries to save him, which eventually results in the revelation of a dark secret.
Linda's name is short for Belinda, "or for pretty" as her mother used to say, but she goes by Linda throughout the book.
In keeping with Linda's background in poetry and other literature, Stewart employs chapter epigraphs with quotes from the works of numerous poets, playwrights, and authors, that fit the themes or actions of each scene. Among these are lines from Macbeth, King John, and Hamlet, by William Shakespeare, as well as from his Sonnets 88 and 90.

The Cat Who Knew Shakespeare

The Cat Who Smelled a Rat

The Cat Who Robbed a Bank