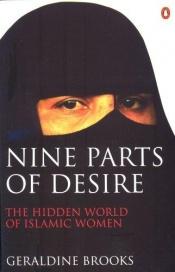 Nine Parts of Desire: The Hidden World of Islamic Women is a non-fiction book by Australian journalist Geraldine Brooks, based on her experiences among Muslim women of the Middle East. It was an international bestseller, translated into 17 languages.
The book deals with cultural and religious practices, describes positive as well as negative experiences, and in parts is critical of cultural practices related to the oppression of women.
Brooks stated that she, as stated by Canadian Woman Studies, "wrote the book for those people who like her, before she visited Islamic countries, would look at a woman in a chador and burst in to outrage or piety. She then sets out to show that neither is an appropriate attitude." Ms. wrote that Brooks "applauds the everyday rebellions of Muslim women" and that she is "[s]imultaneously challenging both Western myths and trendy notions of "cultural relativity"".
The name comes from the saying by Ali "God created sexual desire in 10 parts; then he gave nine parts to women and one to men." William B.

Not without my daughter

My Forbidden Face: Growing Up under the Taliban

A Round-Heeled Woman: My Late-Life Adventures in Se …

A Short History of Progress

Afghanistan, where God only comes to weep