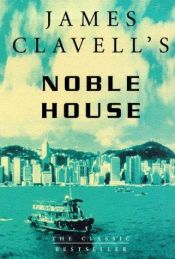 Noble House is a novel by James Clavell, published in 1981 and set in Hong Kong in 1963.
It is a massive book, well over 1000 pages, with dozens of characters and numerous intermingling plot lines. In 1988, it was adapted as a television miniseries for NBC, starring Pierce Brosnan. The miniseries updates the storyline of the novel to the 1980s.
The Noble House also is a nickname of Struan's, the trading company featured prominently in most of Clavell's novels.

Tai-Pan: A Novel of Hong Kong

Hornblower and the Crisis