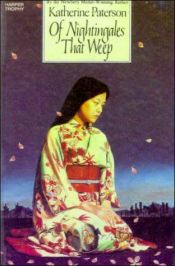 Of Nightingales That Weep

Of Nightingales That Weep is a historical novel for children by Katherine Paterson, published by Crowell in 1974. Set in medieval Japan, the novel tells the story of Takiko, the 11-year-old daughter of a slain samurai warrior. Takiko’s mother remarries Goro, a gentle but unattractive potter/dwarf, whom Takiko fears. When she matures into adulthood, Takiko is able to find employment in the court of the Japanese emperor and falls in love with an enemy spy-Hideo. Eventually, she returns home and is able to reconcile her feelings towards Goro.
Of Nightingales That Weep won the 1994 Phoenix Award from the Children's Literature Association as the best English-language children's book that did not win a major award when it was originally published twenty years earlier. The award is named after the mythical bird phoenix, which is reborn from its ashes, to suggest the book's rise from obscurity.

The Witch of Blackbird Pond

Jacob Have I Loved

Bread and roses, too