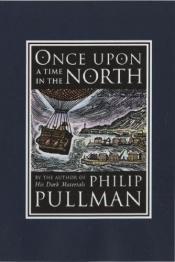 Once Upon a Time in the North

Once Upon a Time in the North, a fantasy novella by Philip Pullman functions as a prequel to Pullman's His Dark Materials trilogy. The premise of the story involves the meeting of Iorek Byrnison and Lee Scoresby — an incident originally expected to appear in The Book of Dust:
I've just finished a short book which will be coming out next spring, probably March or April in this country. It's called Once Upon A Time in the North, and it's about Lee and Iorek. When we see them for the first time with Lyra, Lee is not that old; he's fifty, sixty, something like that, so they know each other for a long time. But I wanted to write a story when they first met as they were young, and I've just written it. I'm making a little book like Lyra's Oxford with extra-bits. I've just been working on it, on a game, a game-board. It's going to be part of that book.
Pullman has remarked that in addition to Once Upon a Time in the North and The Book of Dust, a small green book about Will may appear some day:
Lyra's Oxford was a dark red book. Once Upon a Time in the North will be a dark blue book. There still remains a green book. And that will be Will's book. Eventually...

One More for the Road (Avon Books)