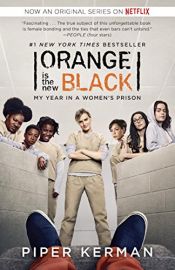 Orange Is the New Black: My Year in a Women's Prison

Orange Is the New Black: My Year in a Women's Prison is a 2010 memoir by Piper Kerman, which tells the story of her money laundering and drug trafficking conviction and subsequent year spent in a women's prison.
Sasha Abramsky of the Columbia Journalism Review stated that the book "documents the author’s attempts to preserve her individuality in the face of a gray, impersonal bureaucracy—one based around prisoner counts, strip searches, rules governing the minutiae of life, and continual reminders that prisoners, by definition, have no power, no real autonomy."
The book became the basis of the Netflix original series Orange Is the New Black.

The Immortal Life of Henrietta Lacks

Incidents in the Life of a Slave Girl