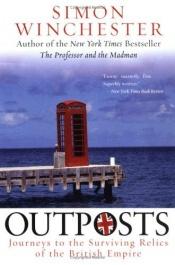 Outposts: Journeys to the Surviving Relics of the British Empire

Outposts, Journeys to the surviving relics of the British Empire is a book by Simon Winchester. It details his travels to each of the remaining dependencies of the British Empire and was first published in 1985 under the title The Sun Never Sets: Travels to the Remaining Outposts of the British Empire. It was reprinted in 2003 with a new foreword written to address the changing political climate and attitudes in relation to the British Empire, most importantly concerning the handover of Hong Kong to China and, more generally, the rise of globalism.
The book takes on an elegiac tone as Winchester searches hopefully for remnants of imperial order, and as such marks a distinct period during Margaret Thatcher's government when a resurgence of British patriotism was mismatched to its still-diminishing former empire. This is particularly evident in his chapter on the Falkland Islands, which Britain had just defended from an Argentine invasion in 1982.
In Outposts, Winchester travels to, or writes about, the following places.
British Indian Ocean Territory
Tristan da Cunha
Gibraltar
Ascension Island
Saint Helena
Hong Kong

In Xanadu: A Quest

The River at the Center of the World: A Journey Up …