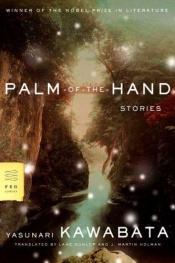 Palm-of-the-Hand Stories is the name Japanese author Yasunari Kawabata gave to more than 140 short stories he wrote over his long career, though he reputedly preferred the reading Tanagokoro for the 掌 character. The earliest story was published in 1920 with the last appearing posthumously in 1972. The stories are characterized by their brevity – some are less than a page long – and by their dramatic concision.
Although scattered individual stories had previously appeared in English, in 1988 Lane Dunlop and J. Martin Holman published the first substantial volume of English translations, a total of 70 stories drawn from the period of almost 50 years from 1922 until Kawabata's death in 1972, as Palm-of-the-Hand Stories. Dunlop and Holman's collection was reissued by Farrar, Straus, and Giroux under the North Point Press imprint in 2006.
In 1998, Holman's translations of another 20 of the palm-of-the-hand stories that had been published originally in Japanese before 1930 appeared in the book, The Dancing Girl of Izu and Other Stories, published by Counterpoint Press.

Froth on the Daydream