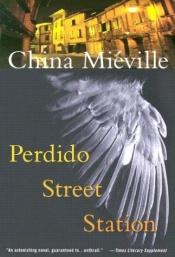 Perdido Street Station is the second published novel by China Miéville and the first of three independent works set in the fictional world of Bas-Lag, a world where both magic and steampunk technology exist. The novel has won several literary awards.
In an interview, Miéville described this book as "basically a secondary world fantasy with Victorian era technology. So rather than being a feudal world, it's an early industrial capitalist world of a fairly grubby, police statey kind!"
Perdido Street Station is set in Bas-Lag's large city-state of New Crobuzon: the title refers to a railway station at the heart of the city.