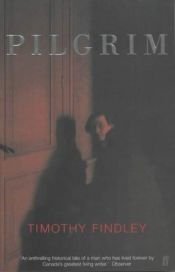 Pilgrim is a novel by Timothy Findley, first published by HarperFlamingo in Canada in 1999. The first US edition was published by HarperCollins in 2000. The novel is typical of Findley's interest in Jungian psychology; in fact, Carl Jung himself is a major character.
The novel's protagonist is Pilgrim, an immortal who is brought to Jung's clinic in Zürich after his latest failed suicide attempt. Pilgrim has lived through the ages, moving from one life to another, and claims to be tired of living. Jung takes it upon himself to cure what he sees as a delusion and to restore Pilgrim's will to live.
Pilgrim is the inspiration for a contemporary opera, The Dream Healer, composed by Lloyd Burritt, with libretto by Christopher Allan and Don Mowatt. The premiere is planned for March 2008 at the Chan Centre for the Performing Arts at the University of British Columbia. It will star mezzo-soprano Judith Forst as Lady Sybil Quartermaine