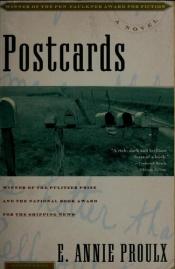 Postcards is E. Annie Proulx's 1992 novel about the life and travels of Loyal Blood across the American West. The critically acclaimed predecessor to Proulx's award-winning The Shipping News, it cuts between stories of Loyal's travels and the stories of his family, to whom he sends irregular postcards about his life and experiences. Loyal never leaves a return address, so is unable to hear back from his family and therefore misses all the news from home, including the death of his father and mother, the sale of the family farm and the marriage of his sister to a virtual stranger.
The novel's ambiguous content provides a more personal view of America in the 20th Century, dealing with themes of war, industrialization, conservation and The American Dream. It also provides a glimpse into the way a family unit is slowly destroyed due to this arrival of a new age. Fate is one of the chief themes that the novel holds to, and the idea that no matter how hard one works for a better life, fate will never let you.