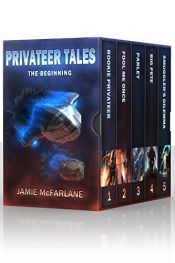 In a galaxy filled with space pirates, three heroes must risk everything to fly free…

5 books. 500+ five-star reviews. Over 900 pages of rollicking adventures through the cosmos!

Liam Hoffen would give anything to leave his hometown mining colony in a blaze of rocket fuel. But his dreams of navigating the stars are impossible… until a pirate attack forces him to reveal the hero within.

Celina Dontal is a free woman after 18 months trapped by the brutal Red Houzi Clan. Her freedom comes with a shock: her sister is missing and the only clue points to a massive Mars metropolis…

Decades earlier, Liam’s father Pete was a Marine Sergeant trapped behind enemy lines. To get his men out of a war zone, his only choice is to disobey orders. But when he’s captured, who exactly will rescue the rescuer?

Privateer Tales The Beginning: Boxed Set combines these thrilling space opera tales in a five-book collection. If you like fast-paced action, eccentric casts of characters, and modern takes on classic sci-fi fun, then you’ll love Jamie McFarlane’s captivating tales amongst the stars.