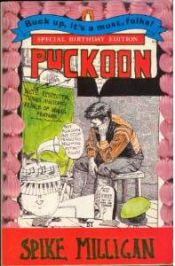 Puckoon is a comic novel by Spike Milligan, first published in 1963. It is his first full-length novel, and only major fictional work. Set in 1924, it details the troubles brought to the fictional Irish village of Puckoon by the Partition of Ireland: the new border, due to the incompetence of the Boundary Commission, passes directly through the village, with most of the village placed in the independent Irish Free State, but with a significant portion to Northern Ireland.
The protagonist of the novel is the feckless Dan Milligan, a man so lazy that the author is obliged to take direct action to prevent him spending the entire novel lounging about at home; thus alerted to his status as a fictional character, Dan frequently breaks the fourth wall, speaking directly to the writer about the trouble he has been made to endure.

So Long, and Thanks for All the Fish

The Looney: An Irish Fantasy

Psmith in the City