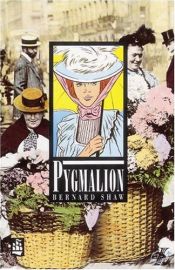 One of George Bernard Shaw's best-known plays, Pygmalion was a rousing success on the London and New York stages, an entertaining motion picture and a great hit with its musical version, My Fair Lady. An updated and considerably revised version of the ancient Greek legend of Pygmalion and Galatea, the 20th-century story pokes fun at the antiquated British class system.
In Shaw's clever adaptation, Professor Henry Higgins, a linguistic expert, takes on a bet that he can transform an awkward cockney flower seller into a refined young lady simply by polishing her manners and changing the way she speaks. In the process of convincing society that his creation is a mysterious royal figure, the Professor also falls in love with his elegant handiwork.
The irresistible theme of the emerging butterfly, together with Shaw's brilliant dialogue and splendid skills as a playwright, have made Pygmalion one of the most popular comedies in the English language. A staple of college drama courses, it is still widely performed.

St.Joan: A Chronicle Play In Six Scenes And An Epil …

Our Town : A Play in Three Acts