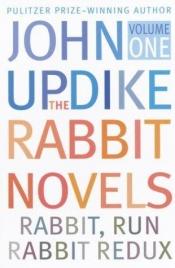 When we first met him in Rabbit, Run (1960), the book that established John Updike as a major novelist, Harry (Rabbit) Angstrom is playing basketball with some boys in an alley in Pennsylvania during the tail end of the Eisenhower era, reliving for a moment his past as a star high school athlete. Athleticism of a different sort is on display throughout these four magnificent novels—the athleticism of an imagination possessed of the ability to lay bare, with a seemingly effortless animal grace, the enchantments and disenchantments of life.

Updike revisited his hero toward the end of each of the following decades in the second half of this American century; and in each of the subsequent novels, as Rabbit, his wife, Janice, his son, Nelson, and the people around them grow, these characters take on the lineaments of our common existence. In prose that is one of the glories of contemporary literature, Updike has chronicled the frustrations and ambiguous triumphs, the longuers, the loves and frenzies, the betrayals and reconciliations of our era. He has given us our representative American story.

This Rabbit Angstrom volume is comprised of the following novels: Rabbit, Run; Rabbit Redux; Rabbit is Rich; and Rabbit at Rest.

Back When We Were Grownups

Dinner at the Homesick Restaurant