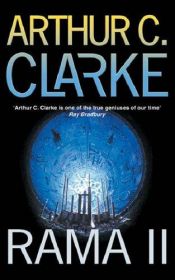 Rama II is a novel by Gentry Lee and Arthur C. Clarke first published in 1989. It recounts humankind's further interaction with the Ramans, first introduced in Rendezvous with Rama. Written primarily by Lee, Rama II has a distinctly different writing style than the original, with a more character driven narrative and a closer-to-contemporary mindset, ambience and human relations than the first novel's more futuristic tones.
Rama II is the first novel of the "new" Rama series, as Rendezvous with Rama is not always counted as part of it. The Rama series includes two more sequels: The Garden of Rama and Rama Revealed.

The Garden of Rama

Beyond the Fall of Night