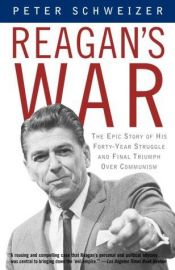 Reagan's War: The Epic Story of His Forty-Year Struggle and Final Triumph Over Communism

Reagan's War is a book by Peter Schweizer crediting Ronald Reagan with winning the Cold War against Communism. It recounts Reagan's long series of struggles with communists, starting in Hollywood union politics and ending in the White House. It uses "secret documents obtained from archives in Russia, Germany, Poland, Hungary and the United States."
The book received a positive review in The Washington Post from Walter Russell Mead and was later made into a film named In the Face of Evil: Reagan's War in Word and Deed.

The Fourth Turning: An American Prophecy - What the …