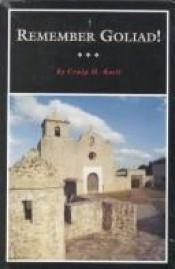 When Sam Houston's revolutionary soldiers won the Battle of San Jacinto and secured independence for Texas, their battle cry was "Remember the Alamo! Remember Goliad!" Everyone knows about the Alamo, but far fewer know about the stirring events at Goliad.

Though its population has never exceeded two thousand, Goliad has been an important site of Texas history since Spanish colonial days. It is the largest town in the county of the same name, which was one of the original counties of Texas created in 1836 and was named for the vast territory that was governed as the municipality of Goliad under the Republic of Mexico.

Goliad offers one of the most complete examples of early Texas courthouse squares, and has been listed as a historic preservation district on the National Register. But the sites that forever etched this sleepy Texas town into historical consciousness are those made infamous by two of the most controversial episodes of the entire Texas Revolution—the Fannin Battleground at nearby Coleto Creek, and Nuestra Señora de Loreto (popularly called Presidio La Bahía), site of the Goliad Massacre on Palm Sunday, March 27, 1836.

This book tells the sad tale of James Fannin and his men who fought the Mexican forces, surrendered with the understanding that they would be treated as prisoners of war, and then under orders from Santa Anna were massacred. Like the men who died for Texas independence at the Alamo, the nearly 350 men who died at Goliad became a rallying cry. Both tragic stories became part of the air Texans breathe, but the same process that elevated Crockett, Bowie, Travis, and their Alamo comrades to heroic proportions has clouded Fannin in mystery and shadow.

In Remember Goliad!, Craig Roell tells the history of the region and the famous battle there with clarity and precision. This exciting story is handsomely illustrated in a popular edition that will be of interest to scholars, students, and teachers.

A Line in the Sand: The Alamo in Blood and Memory

Freedom on the Border: An Oral History of the Civil …

Galveston Cats (Being the glorious tale of Great Au …

Fifty Years of the New York Daily News in Pictures