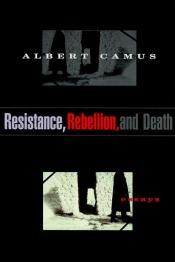 Resistance, Rebellion, and Death is a 1960 collection of essays written by Albert Camus and selected by the author prior to his death. The essays here generally involve conflicts near the Mediterranean, with an emphasis on his home country Algeria, and on the Algerian War of Independence in particular. He also criticizes capital punishment and totalitarianism in particular.
Camus proclaims the call to justice and the struggle for freedom also declaimed in the Old Testament, particularly the minor prophets. But he does so in a modern context, where God is silent and man is the master of his own destiny. Although he sees no messianic age, he proclaims the hope that by continuous effort, evil can be diminished and freedom and justice may become more prevalent.
Also collected here, in the essay "The Artist and His Time," is the address Camus gave in December 1957 at the University of Uppsala, entitled "Create Dangerously". The speech is reminiscent of Tolstoy's essay, "What is Art?", in that Camus speaks of the social context of art, concluding that "the only justification [for the artist] ... is to speak up for those ... who cannot do so."

The Dialectic of Sex: The Case For Feminist Revolut …

Change We Can Believe In

The Gospel According to Larry

Lend Me Your Ears