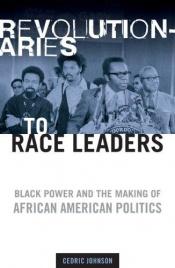 Revolutionaries to Race Leaders: Black Power and the Making of African American Politics

The Black Power movement represented a key turning point in American politics. Disenchanted by the hollow progress of federal desegregation during the 1960s, many black citizens and leaders across the United States demanded meaningful self-determination. The popular movement they created was marked by a vigorous artistic renaissance, militant political action, and fierce ideological debate.

Exploring the major political and intellectual currents from the Black Power era to the present, Cedric Johnson reveals how black political life gradually conformed to liberal democratic capitalism and how the movement’s most radical aims—the rejection of white aesthetic standards, redefinition of black identity, solidarity with the Third World, and anticapitalist revolution—were gradually eclipsed by more moderate aspirations. Although Black Power activists transformed the face of American government, Johnson contends that the evolution of the movement as a form of ethnic politics restricted the struggle for social justice to the world of formal politics.

Johnson offers a compelling and theoretically sophisticated critique of the rhetoric and strategies that emerged in this period. Drawing on extensive archival research, he reinterprets the place of key intellectual figures, such as Harold Cruse and Amiri Baraka, and influential organizations, including the African Liberation Support Committee, the National Black Political Assembly, and the National Black Independent Political Party in postsegregation black politics, while at the same time identifying the contradictions of Black Power radicalism itself.

Documenting the historical retreat from radical, democratic struggle, Revolutionaries to Race Leaders ultimately calls for the renewal of popular struggle and class-conscious politics.

The Disuniting of America

The Missionary and the Libertine: Love and War in E …

Malcolm X: A Life of Reinvention