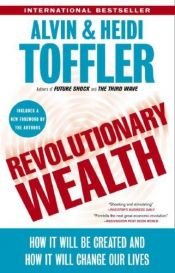 Revolutionary Wealth is a book written by futurists Alvin Toffler and his wife Heidi Toffler, first published in 2006 by Knopf. It is a continuation of the 1980 The Third Wave, which itself is a sequel to Future Shock.
Revolutionary Wealth significantly expands on the Third Wave. As in the older volume, the book argues that institutions—public, private, and social—left over from an era of mass production are unsuited to a new civilization being built throughout the world. Only now, further detail is provided on what will constitute the Third Wave society.

Leadership and the new science

Manias, panics, and crashes : a history of financia …

The Ecology of Commerce: How Business Can Save the …