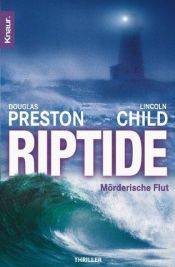 Riptide is a novel written by Lincoln Child and Douglas Preston published in 1998 by Warner Books.
The novel revolves around a plot to retrieve the buried treasure of nefarious pirate Red Ned Ockham. The treasure, which is estimated to be worth close to two billion dollars, reputedly includes "St. Michael's Sword", a weapon with the power to kill anyone who looks at it.
The novel is pure fiction but is based in part on the legend of the Oak Island Money Pit.
The location of the pit, described as the Water Pit in Riptide, is moved to a fictional Ragged Island, a dangerous drumlin island approximately six miles off the coast of Maine.
Riptide is prominent among Preston and Child's works as being the one and only novel by both authors that is a complete stand-alone story, separate from their other works. No characters seen or mentioned in Riptide have any role in any of their other novels, unlike their other stand-alone works such as Mount Dragon, Thunderhead, and The Ice Limit.

The Wheel of Darkness