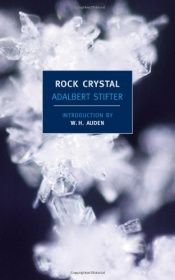 Rock Crystal is a novella by Austrian writer Adalbert Stifter. It influenced Thomas Mann and others with its "suspenseful, simple, myth-like story and majestic depictions of nature." Mann said Stifter is "one of the most extraordinary, the most enigmatic, the most secretly daring and the most strangely gripping narrators in world literature." Poet W. H. Auden called Rock Crystal "a quiet and beautiful parable about the relation of people to places, of man to nature."
It was translated to English in 1945 by Elizabeth Mayer and Marianne Moore, re-issued by Pushkin Press in 2001 and the New York Review of Books in 2008. An earlier translation from 1914 by Lee M. Hollander is in the public domain.
In 1949, it was adapted into a German-language film Mountain Crystal.

A Sorrow Beyond Dreams: A Life Story