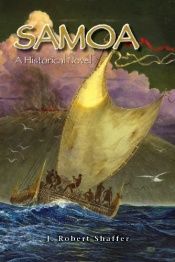 Author J. Robert Shaffer began his research on Samoa as a Peace Corps volunteer. In passionate pursuit of details, he interviewed hundreds of Samoans, absorbing and understanding their culture. Based on the rich history and mythology of the Samoan islands, Shaffer created an epic saga spanning 3000 years, Samoa.
The story of the islands and their people, from Ratu the ancient mariner, leading his people on a voyage of discovery, to the missionary Evan Surrey and his Samoan wife Nuanua, who overcome the deep seated prejudices of the Christian church to change the course of the religious and political histories of Samoa in the mid nineteenth century. Through the eyes of Mika Sanderson, the grandson of Evan Surrey, the story of Samoa is told.
Mika traces the rise and fall of each major influence on the islands, documenting the rivalries of colonial powers that thrust the people of Samoan into a bloody civil war.
Each new era of Samoa gives rise to a new cast of characters, all with vested interest in Samoa, its people and its resources.
Throughout the nineteenth century, adventurers, colonialists, murderers and missionaries, the best and worst of Europe and America, sail to Samoa where they find a wise and proud people steeped in ancient culture and beliefs.
With the dawn of the twentieth century, Samoa reels under the flu epidemic of 1918, and following World War I, the Samoans are under the stifling administration of New Zealand. World War II finds the United States Marines in American Samoa. Following the war, winds of change sweep across the Pacific.
In this little known part of the world, Mika chronicles the long and glorious history of Samoa, the smoking island under the sunrise.