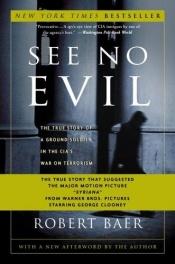 See No Evil: The True Story of a Ground Soldier in the CIA's War on Terrorism

See No Evil: The True Story of a Ground Soldier in the CIA's War Against Terrorism is a 2003 memoir by Robert Baer, a former CIA case officer in the Directorate of Operations. Baer begins with his upbringing in the United States and Europe and continues with a tour of his CIA experiences across the globe. Approximately the first two-thirds of the memoir focus on the various experiences of Baer's two-decade career at the CIA, while the last third depicts the growing cynicism brought on by the corruption and obliviousness encountered in Washington.
One of the main focal points of the story is Baer's obsession with uncovering the perpetrators of the unsolved 1983 United States Embassy bombing in Beirut, Lebanon. Baer's memoir describes his own solution of the mystery.
The overall theme around which the memoir is built is his view of the CIA losing its prowess due to increasing diplomatic sensitivity in Washington's foreign policies in the aftermath of political fiascoes from active American involvement in foreign politics in the 1970s and 1980s.