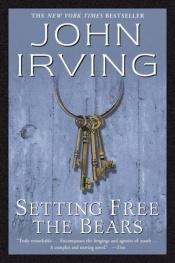 Setting Free the Bears is the first novel by American author John Irving, published in 1968 by Random House.
Irving studied at the Institute of European Studies in Vienna in 1963 and Bears was written between 1965 and 1967 based largely on Irving's understanding of the city and its rebellious youth of the 1960s. The original manuscript for the book was submitted as his Masters thesis at the University of Iowa’s Writer's Workshop in 1967, and was later expanded and revised to its published version.
Bears is widely criticized as disjointed and naïve but in retrospect is deemed to have all the elements that have made Irving one of the most successful American authors of the day. These include a Dickensian narrative style, an inclination for the eccentric, unexpected violence, and a tendency to include thinly disguised biographical details in his work.