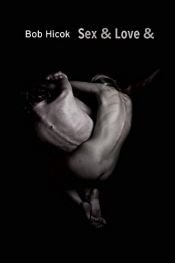 "The most potent ingredient in virtually every one of Bob Hicok's compact, well-turned poems is a laughter as old as humanity itself."The New York Times Book Review

"Hicok's poems are like boomerangs; they jut out in wild, associative directions, yet find their way back to the root of the matter, often in sincere and heartbreaking ways."Publishers Weekly

In Sex & Love &, Bob Hicok attempts the impossible task of confronting love and its consequences, in which "everything is allowed, minus forever." Switching gracefully between witty confessions and blunt confrontations, Hicok muses on age, distance, secret messages, and, of course, sex. Throughout, poetry is discovered to be among our most effective tools to examine the delirium of making contact.

Bob Hicok's poems have appeared in the New Yorker, Poetry, and the American Poetry Review. His books have been awarded the Bobbitt Prize from the Library of Congress and named a "Notable Book of the Year" by Booklist. Hicok has worked as an automotive die designer and a computer system administrator. He is currently teaching at Purdue University.

Tell Me the Truth About Love

The Beauty of the Husband : A Fictional Essay in 29 …

The Complete Poetry and Selected Prose

Essential Poems (To Fall in Love With)

The complete elegies of Sextus Propertius

The complete poems of John Keats

Ahead of All Parting: The Selected Poetry and Prose …