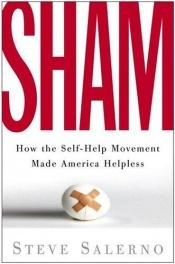 Sham: How the Self-Help Movement Made America Helpless

Self-help: To millions of Americans it seems like a godsend. To many others it seems like a joke. But as investigative reporter Steve Salerno reveals in this groundbreaking book, it’s neither—in fact it’s much worse than a joke. Going deep inside the Self-Help and Actualization Movement (fittingly, the words form the acronym SHAM), Salerno offers the first serious exposé of this multibillion-dollar industry and the real damage it is doing—not just to its paying customers, but to all of American society.

Based on the author’s extensive reporting—and the inside look at the industry he got while working at a leading “lifestyle” publisher—SHAM shows how thinly credentialed “experts” now dispense advice on everything from mental health to relationships to diet to personal finance to business strategy. Americans spend upward of $8 billion every year on self-help programs and products. And those staggering financial costs are actually the least of our worries.

SHAM demonstrates how the self-help movement’s core philosophies have infected virtually every aspect of American life—the home, the workplace, the schools, and more. And Salerno exposes the downside of being uplifted, showing how the “empowering” message that dominates self-help today proves just as damaging as the blame-shifting rhetoric of self-help’s “Recovery” movement.

• The inside story on the most notorious gurus—from Dr. Phil to Dr. Laura, from Tony Robbins to John Gray

• How your company might be wasting money on motivational speakers, “executive coaches,” and other quick fixes that often hurt quality, productivity, and morale

• How Americans blindly accept that twelve-step programs offer the only hope of treating addiction, when in fact these programs can do more harm than good

As Salerno shows, to describe self-help as a waste of time and money vastly understates its collateral damage. And with SHAM, the self-help industry has finally been called to account for the damage it has done.


Also available as an eBook

Asylums; essays on the social situation of mental p …

A Whole New Mind: Moving from the Information Age t …