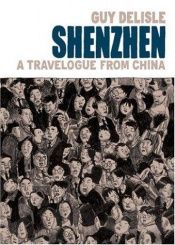 Shenzhen is a black-and-white graphic novel by the Canadian Québécois author Guy Delisle published in 2000.
It documents Delisle's three-month deployment in December 1997 to Shenzhen, a big city developed by the People's Republic of China near Hong Kong, where he is acting as the liaison between Dupuis, a Belgian animation producing company and a Chinese studio, where Chinese animators draw child-oriented films from the layout phase taking the French storyboards as a guide.
He struggles with boredom, the difficulties of outsourcing and the culture shock of a Westerner in this profit-oriented Chinese city.
The book has 145 pages.
Some of the frames are drawn by Chinese artists and by a friend of Delisle's.