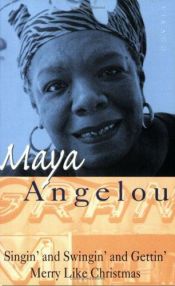 Singin' and Swingin' and Gettin' Merry Like Christmas is the third book of Maya Angelou's seven-volume autobiography series. Set between 1949 and 1955, the book spans Angelou's early twenties. In this volume, Angelou describes her struggles to support her young son, form meaningful relationships, and forge a successful career in the entertainment world. The work's 1976 publication was the first time an African-American woman had expanded her life story into a third volume. Scholar Dolly McPherson calls the book "a graphic portrait of the adult self in bloom", while critic Lyman B. Hagen calls it "a journey of discovery and rebirth".
In Singin' and Swingin', Angelou examines many of the same subjects and themes in her previous autobiographies including travel, music, race, conflict, and motherhood. Angelou depicts the conflict she felt as a single mother, despite her success as a performer as she travels Europe with the musical Porgy and Bess. Her depictions of her travels, which take up 40 percent of the book, have roots in the African-American slave narrative.

A Song Flung Up To Heaven

When I Was Puerto Rican

Killing Yourself to Live: 85% of a True Story