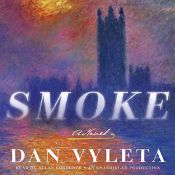 "The laws of Smoke are complex. Not every lie will trigger it. A fleeting thought of evil may pass unseen; a fib, an excuse, a piece of flattery. Next thing you know, its smell is in your nose. There is no more hateful smell in the world than the smell of Smoke."

England. A century ago, give or take a few years.

An England where people who are wicked in thought or deed are marked by the Smoke that pours forth from their bodies, a sign of their fallen state. The aristocracy do not smoke, proof of their virtue and right to rule, while the lower classes are drenched in sin and soot. An England utterly strange and utterly real.

An elite boarding school where the sons of the wealthy are groomed to take power as their birthright. Teachers with mysterious ties to warring political factions at the highest levels of government. Three young people who learn everything they've been taught is a lie - knowledge that could cost them their lives. A grand estate where secrets lurk in attic rooms and hidden laboratories. A love triangle. A desperate chase. Revolutionaries and secret police. Religious fanatics and coldhearted scientists. Murder. A London filled with danger and wonder. A tortured relationship between a mother and a daughter and a mother and a son. Unexpected villains and unexpected heroes. Cool reason versus passion. Rich versus poor. Right versus wrong, though which is which isn't clear.

This is the world of Smoke, a narrative tour de force, a tale of Dickensian intricacy and ferocious imaginative power, richly atmospheric and intensely suspenseful.

A Meeting at Corvallis

The Scourge of God

The Two Georges: The Novel of an Alternate America …

Island in the Sea of Time