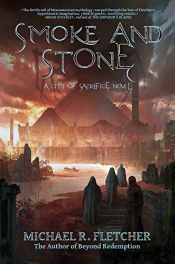 After a cataclysmic war of the gods, the last of humanity huddles in Bastion, a colossal ringed city. Beyond the outermost wall lies endless desert haunted by the souls of all the world’s dead.

Trapped in a rigid caste system, Nuru, a young street sorcerer, lives in the outer ring. She dreams of escape and freedom. When something contacts her from beyond the wall, she risks everything and leaps at the opportunity. Mother Death, a banished god seeking to reclaim her place in Bastion’s patchwork pantheon, has found her way back into the city.

Akachi, born to the wealth and splendour of Bastion’s inner rings, is a priest of Cloud Serpent, Lord of the Hunt. A temple-trained sorcerer, he is tasked with bringing peace to the troublesome outer ring. Drawn into a dark and violent world of assassins, gangs, and street sorcerers, he battles the spreading influence of Mother Death in a desperate attempt to save Bastion.

The gods are once again at war.