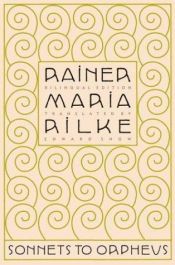 The Sonnets to Orpheus are a cycle of 55 sonnets written in 1922 by the Bohemian-Austrian poet Rainer Maria Rilke. It was first published the following year. Rilke, who is "widely recognized as one of the most lyrically intense German-language poets," wrote the cycle in a period of three weeks experiencing what he described a "savage creative storm." Inspired by the news of the death of Wera Ouckama Knoop, a playmate of Rilke's daughter Ruth, he dedicated them as a memorial, or Grab-Mal, to her memory.
At the same time in February 1922, Rilke had completed work on his deeply philosophical and mystical ten-poem collection entitled Duino Elegies which had taken ten years to complete. The Sonnets to Orpheus and the Duino Elegies are considered Rilke's masterpieces and the highest expressions of his talent.