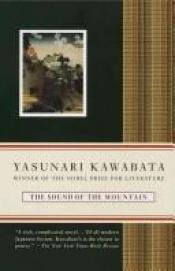 Sound of the Mou

The Sound of the Mountain is a novel by Japanese writer Yasunari Kawabata, serialized between 1949 and 1954. The Sound of the Mountain is unusually long for a Kawabata novel, running to 276 pages in its English translation. Like much of his work, it is written in short, spare prose akin to poetry, which its English-language translator Edward Seidensticker likened to a haiku in the introduction to his translation of Kawabata's best-known novel, Snow Country.
Sound of the Mountain was adapted as a film of the same name, directed by Mikio Naruse and starring Setsuko Hara, So Yamamura, Ken Uehara and Yatsuko Tanami.
The book is included in the Bokklubben World Library's list of the 100 greatest works of world literature.
For the first U.S. edition, Seidensticker won the National Book Award in category Translation.