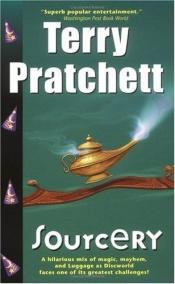 Sourcery is the fifth Discworld novel by Terry Pratchett, published in 1988. On the Discworld, sourcerers – wizards who are sources of magic, and thus immensely more powerful than normal wizards – were the main cause of the great mage wars that left areas of the disc uninhabitable. As eight is a powerful magical number on Discworld, men born as the eighth son of an eighth son are commonly wizards. Since sourcerers are born the eighth son of an eighth son of an eighth son, they are wizards squared. To prevent the creation of sourcerers, therefore, wizards are not allowed to marry or have children. The first few pages of the novel deal with a sourcerer's father who cheats death by making a prophecy that Death must honour; the alternative is to risk destroying the Discworld. The rest of the novel deals with the sourcerer's plan to have wizards rule the Discworld, and the efforts of a small group – including Rincewind the Wizzard, Nijel the Destroyer and Conina the Hairdresser, daughter of Cohen the Barbarian – to thwart those plans.
There are many references to geasa in the text, which are idiosyncratic curses, vows or obligations placed upon a person.