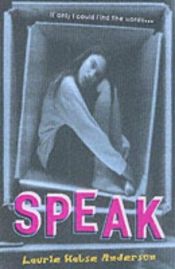 Speak, published in 1999, is Laurie Halse Anderson's young adult novel that tells the story of high school student Melinda Sordino. After accidentally busting an end-of-summer party due to an unnamed incident, Melinda is ostracized by her peers because she will not say why she called the police. Unable to verbalize what happened, Melinda nearly stops speaking altogether, expressing her voice through the art she produces for Mr. Freeman's class. This expression slowly helps Melinda acknowledge what happened, face her problems, and recreate her identity.
Speak is considered a problem novel, or trauma novel. Melinda's story is written in a diary format, consisting of a nonlinear plot and jumpy narrative that mimics the trauma she experienced. Additionally, Anderson employs intertextual symbolism in the narrative, incorporating fairy tale imagery, Hawthorne's The Scarlet Letter, and Maya Angelou, to further represent Melinda's trauma.
Since it was published, the novel has won several awards and has been translated into sixteen languages. The book has faced censorship for the mature content explicit in it.

Betsy in spite of herself

The Cat Ate My Gymsuit